Jane calls for lower beer duty ahead of Budget 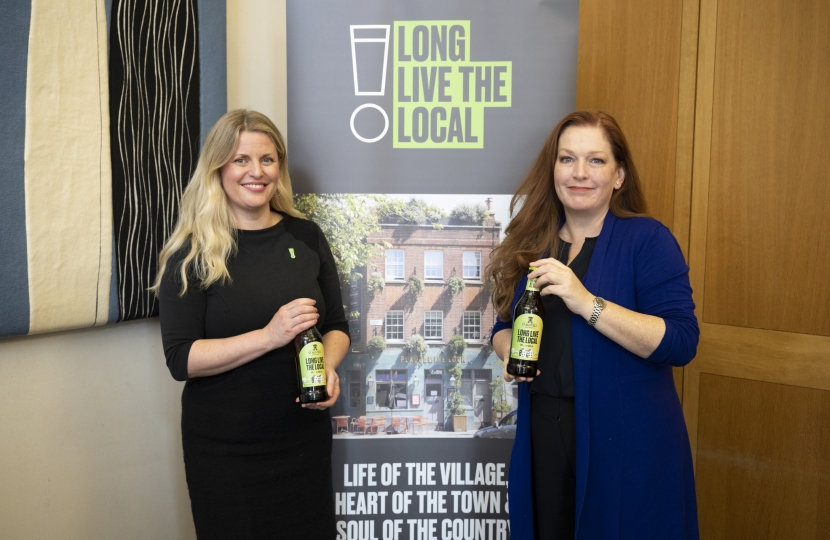 Wolverhampton North East MP Jane Stevenson has called on the Government to reduce beer duty, ahead of next week’s Budget.

Jane is joining calls from the Long Live the Local campaign to help pubs and breweries in Wolverhampton recover and thrive. She joins over 125,000 people who have signed a petition, including 140 people in her constituency.

The campaign calls on the Government to lower VAT and Business Rates for pubs and for an overall reduction in Beer Duty. The COVID-19 pandemic has had a devastating impact on brewers and pubs throughout the UK and continues to do so as the sector tries to kickstart its recovery. The sector needs an immediate boost and the fact that a local pub adds £100,000 to its local economy, creates jobs and acts as a social hub, underlines how direct investment in the form of lower VAT, Business Rates and an overall cut to beer duty can help pubs and their communities to recover.

It would also boost Britain’s world class brewing sector, a homegrown manufacturing success story that brews over 80% of the beer we drink.

Brewing and pubs in Wolverhampton North East supports 1791 jobs and contributes £74m to the local economy. With £1 in every £3 spent in UK pubs going to the taxman, British drinkers and pub goers are overtaxed and this is hampering the recovery of local pubs and brewers across the country.

Jane said: “Pubs are at the heart of communities across Wolverhampton, but they are bearing a disproportionate burden as a result of the pandemic. That’s why I’m calling on the Government to consider cutting unfair taxes on pubs that are hampering their recovery.

“I’m proud to support the Long Live the Local campaign and I’m calling on the Chancellor to lower VAT and Business Rates for pubs and reduce Beer Duty overall at next week’s Budget to support the recovery of pubs.”

Emma McClarkin, Chief Executive of the British Beer and Pub Association, said: “85% of pubs are based in community and rural areas, bringing jobs to the parts of the UK that need them most. They employ over 600,000 people, of which 43% are under 25.

“Cutting Business Rates, VAT and an overall reduction in Beer Duty would go a long way to helping pubs and brewers across Wolverhampton that are desperately trying to recover. We are very grateful to Jane Stevenson for her support for the Long Live the Local campaign, and hope that the Government listens to MPs across Parliament and the thousands of people across the country who are calling on the Chancellor to lower VAT and Business Rates for pubs and cut Beer Duty.”

440 more young people in work across Wolverhampton through Kickstart scheme

Wolverhampton North East MP Jane Stevenson has welcomed new figures which show that 440 more young people across the city are in work thanks to the Government’s Kickstart Scheme, which launched in September 2020.