Jane calls for Molineux to be used for mass coronavirus vaccinations 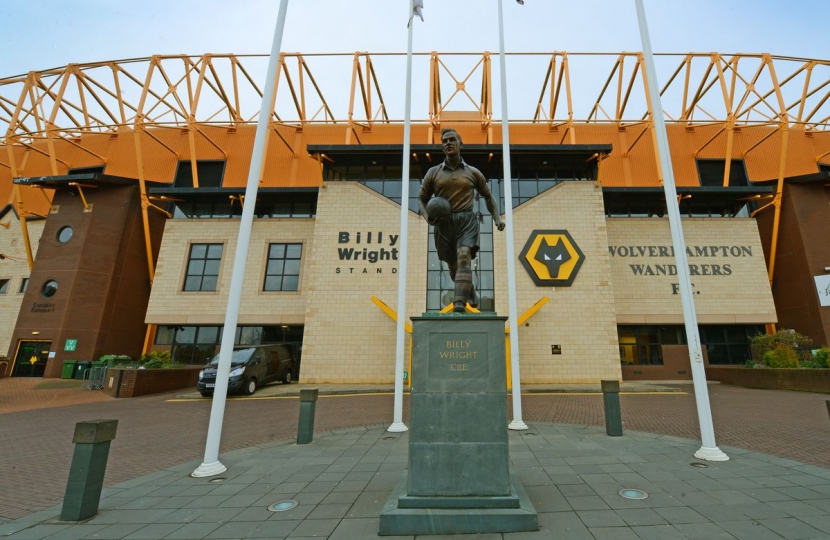 Wolverhampton North East MP Jane Stevenson is calling for Molineux football stadium, home to Wolverhampton Wanderers FC, to be used as a mass vaccination centre for the city’s elderly and vulnerable people.

Following the positive news that the Oxford/AstraZeneca vaccine has been approved for use, it is now clear that the emphasis must shift to vaccinating elderly and clinically vulnerable people as quickly as possible.

As well as calling for Molineux stadium to be used, Jane is also urging Wolverhampton Council to make use of its vast asset portfolio, such as community centres and leisure facilities, by allowing them to be used by the NHS for vaccinations.

Many community hubs have been closed since the start of the pandemic in March. Their locations within communities make them ideal places for rolling out the vaccines. Football stadiums across the UK have been converted into vaccination centres, including Barnet FC’s stadium in North London and Bristol City’s Ashton Gate stadium.

Jane said: “With the positive news of the Oxford vaccine approved for use, the emphasis in our fight against coronavirus must now shift to vaccinating our elderly and vulnerable residents as quickly as possible so that we can ease the restrictions on our lives.

“So I’m calling on the local authority and the local NHS to use Molineux football stadium as a mass vaccination centre for our city. Wolves fans have sadly not been able to go and watch the team play matches, but the club can still play a vital role at this crucial stage.

“Everyone knows where Molineux is, and it has ample parking facilities which makes it ideal for this purpose. I know other football stadiums across the country are being prepared as vaccination centres.

“I am also urging Wolverhampton Council to make available its vast array of buildings, such as community centres which have been closed since the pandemic began in March. We must now vaccinate the priority groups as quickly as possible, so that we can ease pressure on the NHS and reclaim the liberties and freedoms which have been taken away as a result of the pandemic.”