Jane encourages Wolverhampton residents to get a coronavirus test 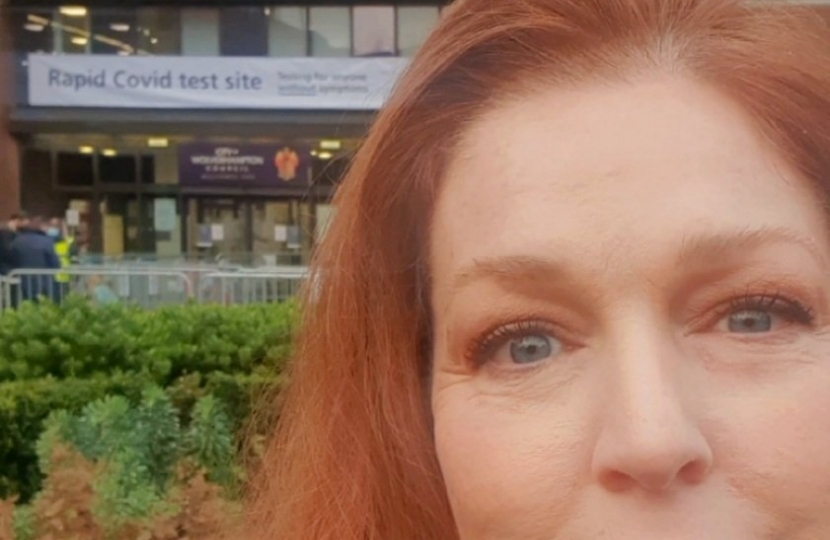 Jane Stevenson, MP for Wolverhampton North East, has urged people who do not currently have any symptoms of coronavirus to take part in the city’s mass testing scheme.

All Tier 3 areas in England, including Wolverhampton, have been offered rapid tests to try and test as many people as possible and drive down infection rates. The mass testing initiative was widely regarded as being behind Liverpool’s significant fall in coronavirus infections, and saw the city move down to Tier 2 after the end of the second lockdown.

Wolverhampton’s first mass testing centre for asymptomatic people opened on Monday (7th December) at the Civic Centre, and Jane visited to get a test herself, which came back negative. More testing centres for people without symptoms will be opening across the city over the coming days and weeks.

People who are experiencing symptoms of coronavirus cannot use the mass testing centres, and instead need to go to several existing testing sites including at the Showell Road car park, the Faulkland Street car park, Mountford Lane car park in Bilston and the Blakenhall Resource Centre on Haggar Street.

Jane said: “I strongly believe that mass testing is an important tool in helping to get Wolverhampton out of Tier 3 as quickly as possible. We saw how successfully it worked in Liverpool, and now I want to see the same results here.

“I have taken the test myself at the mass testing centre in the Civic Centre, and the whole process was quick and easy from start to finish. My result was texted to me a short time afterwards. Fortunately, it was negative!

“I urge everyone, if you have time, to get a test so that we can identify asymptomatic carriers of coronavirus, support them to self-isolate and at the same time drive down the infection rate in Wolverhampton. The sooner we do this, the sooner we can get out of Tier 3 and into a lower tier of restrictions.”