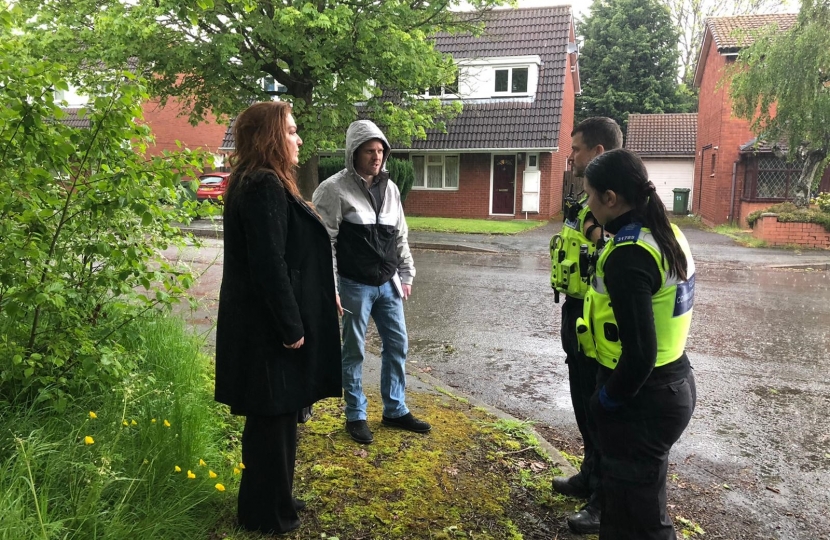 She has recently been contacted by several constituents in the area about issues such as anti-social behaviour and off-road bikes on public land and highways, and wanted to tour the area with the local neighbourhood policing team to discuss these issues and reassure local residents.

Newly-elected Conservative councillor for Oxley ward, Adam Collinge, also joined them on their patrol. Jane and the officers saw fly-tipping on the site of the former Nelson Madela House next to Morrisons. Despite Councillor Collinge successfully getting fly-tipping cleared from the land less than 2 weeks ago, more has since appeared.

The group also went to the former Mirage Youth Centre building, which is still in a state of disrepair and attracts unwanted anti-social behaviour. They then went to the Dovecotes estate to speak to shopkeepers about issues in the area and compliance with Covid-19 regulations.

Jane said: “I would like to thank Sergeant Frear and the local police team in Pendeford for allowing me to join them on a patrol of the area to discuss various issues that constituents have raised with me. It was great to have Oxley councillor Adam Collinge with us too.

“We saw more fly-tipping on the land next to Morrisons, and discussed the best way to tackle this persistent problem. I also raised concerns around anti-social behaviour and off-road bikes being used on public land and roads. The police rely on reports and intelligence from the public, so I would urge people to call 101 or, if it’s an emergency, 999 to speak to the police.

“I continue to work with local police and the council to ensure action is taken on these and other issues.”

Oxley councillor Adam Collinge said: “I was pleased to join our local MP Jane Stevenson and the neighbourhood police team in Pendeford and Dovecotes. Since my election just a few weeks ago, residents have already been in touch with me to raise their concerns about fly-tipping and anti-social behaviour.

“It is a shame to see more fly-tipping on the former Nelson Mandela House site, but I will continue to push the council to introduce more CCTV so that we can catch these prolific offenders.”