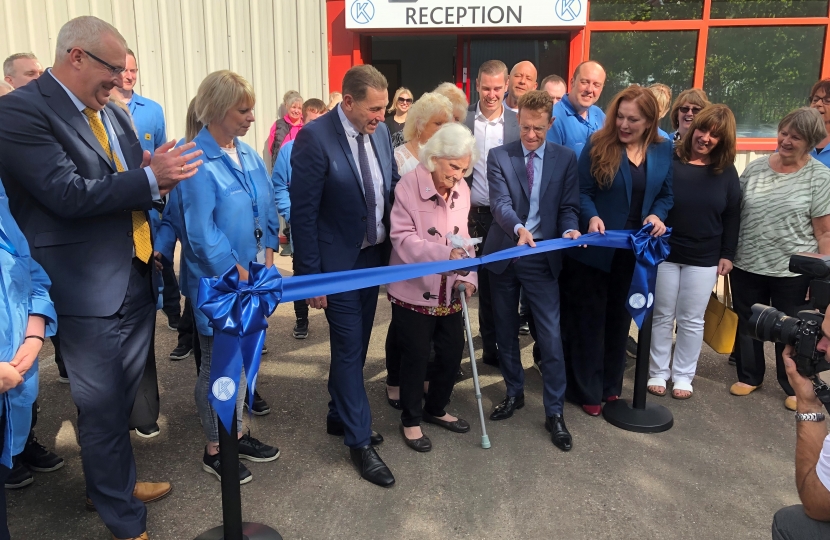 The family-run business was established in Wolverhampton in 1997, and employs around 40 people. Earlier this year, they expanded into a new 18,000 sq ft facility on the Strawberry Lane Industrial Estate.

Jane and Mayor Street were there to officially cut the ribbon to open the new facility, and to tour the factory. Kasdon is a contract electronics manufacturer, where they make electronic assembles for a wide variety of uses such as medical hoists and signal jamming equipment for military applications.

Jane said: “It was fantastic to be able to officially open this expanded facility for local business Kasdon Electronics. After the difficult 18 months the country has been through, I am very pleased to see businesses expanding and job vacancies on the rise.

“Wolverhampton has a long and proud industrial history, and there are many businesses in our city which provide high-skilled jobs and continue that legacy. Wolverhampton is home to some amazing engineering and manufacturing companies, many of which are the only one of its kind in the world.

“I would like to thank Steve Stockley and Kasdon for inviting me to open their new facility.”

West Midlands Mayor Andy Street said: “I had a fascinating visit to Kasdon Electronics, and a tour of their new expanded facilities to see some of the incredibly high-tech work that they do for the medical and military sectors, among others.

“I was amazed at what Steve and his team have built up over the years, and everyone at Kasdon Electronics can be incredibly proud of what they have achieved. I look forward to watching the company continue to grow and succeed in the years ahead.

“We are proud to be based in Wolverhampton and to be a local employer. In relocating to new premises, Kasdon Electronics now has a wonderful opportunity to continue its growth plans in the short to medium term.

“The new site now offers a truly world class facility to offer to the market place.

In adding capacity and technology we hope to be able to take some of the many opportunities offered by this current market and continue to build and develop as a company, as well as offering security and job opportunity for our fabulous team.”