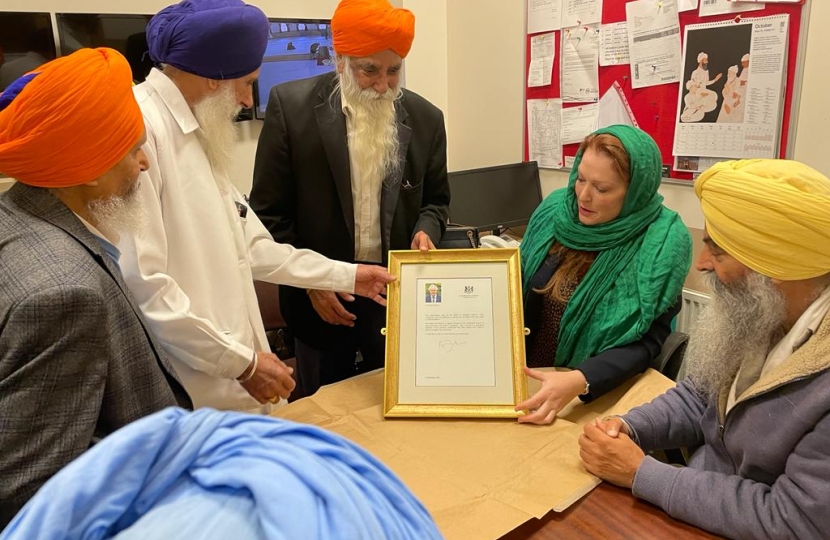 Wolverhampton North East MP Jane Stevenson has presented a letter from the Prime Minister to the Guru Nanak Sikh Gurdwara in Wednesfield, following the unveiling of the Saragarhi statue in September.

The statue of a Sikh soldier was unveiled on 12th September, and while the Prime Minister Boris Johnson couldn’t be there in person, he sent a letter to the Sikh community in Wednesfield commemorating the statue and the Battle of Saragarhi, which took place on 12th September 1897.

The letter was framed and Jane presented it to the gurdwara’s committee last week. It will now be displayed inside the gurdwara for everyone to see.

Jane read out the letter at the unveiling event, and members of the Sikh community were grateful for Prime Minister’s tribute.

In the letter, Mr Johnson says: “The extraordinary story of the Battle of Saragarhi deserves wider recognition, and I am delighted to welcome the unveiling of this new statue to commemorate it.

“This statue will stand as a lasting memorial to the outstanding bravery of those who died at the Battle of Saragarhi – and it will act as a permanent reminder of the enormous contribution that Sikh soldiers have made to Britain throughout the generations.”

Jane said: “The Sikh soldier statue unveiled in Wednesfield is a fitting tribute to those Sikhs who bravely fought and died in the Battle of Saragarhi. I was honoured to attend the unveiling event, and also delighted to read out a personal tribute from the Prime Minister.

“Although he was unable to attend the event in person, I know that many Sikhs were extremely grateful to receive a letter from the Prime Minister to commemorate the event. The letter will now be displayed inside the gurdwara for everyone to see.

“I want to thank the committee at the gurdwara for welcoming me and allowing me to present the Prime Minister’s letter.”

Jane Stevenson, MP for Wolverhampton North East, has celebrated nearly 14,000 apprenticeships in the aerospace, defence, security and space sectors by hosting a reception in the Houses of Parliament.