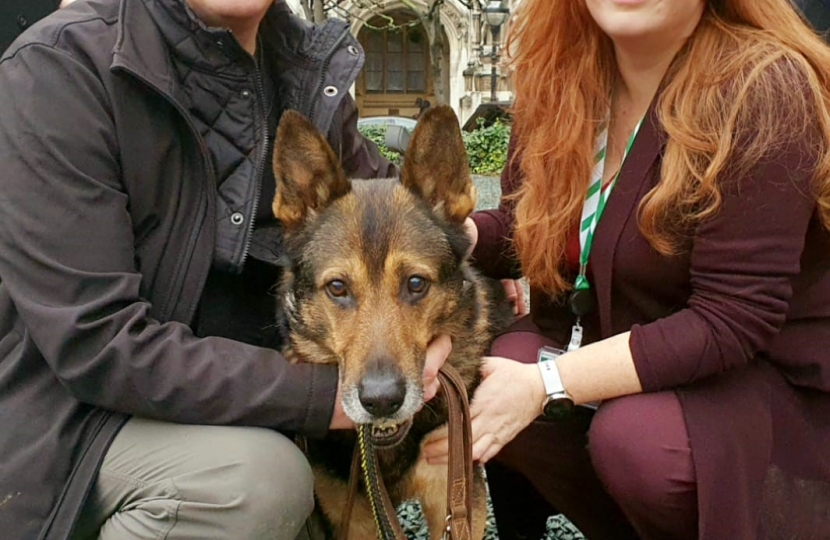 England and Wales currently have some of the lowest sentences for animal offences in the world.

Mr Loder’s proposals, also known as ‘Finn’s Law Part 2’, follow a successful campaign last year to make it an offence to harm animals in the line of duty, such as police dogs. The Government subsequently introduced legislation to protect service animals, known as ‘Finn’s Law’.

Finn is a police dog who was attacked along with his owner PC Dave Wardell in October 2016 whilst attempting to arrest someone. Finn was awarded the PDSA Gold Medal for Bravery, and both Finn and PC Wardell appeared on Britain’s Got Talent. They have led the campaign to protect service animals and now want to see tougher punishments for animal cruelty.

As the owner of two Cavalier King Charles Spaniels, Jane has made the prevention of animal cruelty one of her top priorities in Parliament. Earlier this week, she spoke in another debate in Parliament to support a petition on pet theft. She urged the Government to remove the monetary value of a pet as a factor in sentencing, and for a separate law on pet theft to reflect the impact on victims.

Jane said: “Animal cruelty is something I care very deeply about, and I want to see tougher penalties for the perpetrators of these awful crimes. I supported Finn’s Law last year, and was delighted to see the Government introduce legislation to protect service animals.

“Now I am backing the campaign to increase the maximum custodial penalty for animal cruelty offences from six months to five years. As a nation of animal lovers, it cannot be right that we currently have some of the lowest sentences for these offences in the world.

“I will be speaking in support of the proposals in Parliament this week, and I hope that the Government will agree to toughen up the rules around animal cruelty offences.”