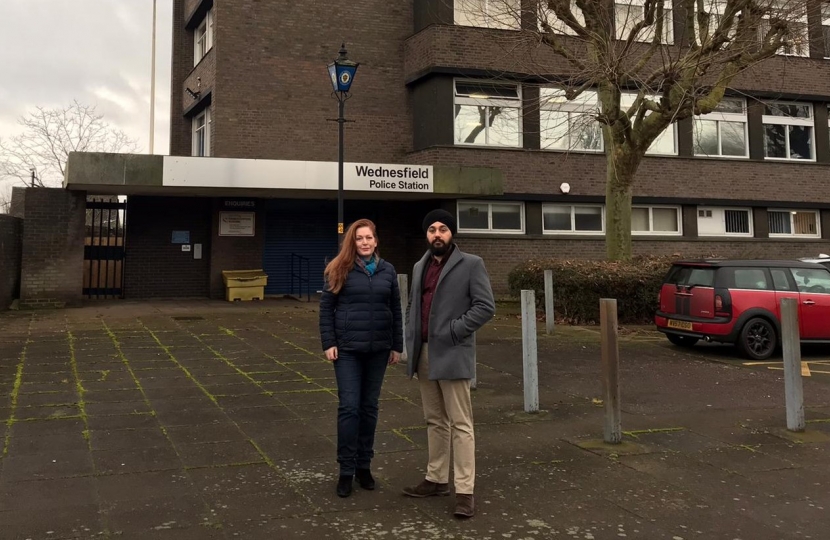 Wednesfield residents are being urged to sign a new petition to save the area’s police station from closure – and ensure a new front desk is opened there.

The station, in Alfred Squire Road, is one of 24 across the West Midlands that David Jamieson, the Labour Police and Crime Commissioner (PCC) has proposed closing.

Now Jane Stevenson, MP for Wolverhampton North East, has launched the online petition – at www.savewednesfieldpolicestation.co.uk – with Jay Singh-Sohal, the Conservative candidate to be the region’s next PCC, who has vowed to stop the closure if he is elected.

Jane said: “The future of Wednesfield Police Station is in the balance, and my constituents are understandably very worried about it.

"Local people in Wednesfield want a visible, strong, long-term Police presence, and the reassurance of a local Police station they can access. Instead of closing it down, Jay Singh-Sohal has committed to reopening a front desk at the station, which residents will welcome.

“It is simply unacceptable that, as the Government is increasing police recruitment, with hundreds of additional local officers already being funded, there are these plans to close our station.

“Residents want to keep policing local, and that means having a proper police station at the heart of our community. Yet this current Labour Commissioner wants to shut community police stations – while he has spent millions on his own lavish HQ and police station in Birmingham City Centre.”

The Government is currently engaged in a massive police recruitment programme, with 366 additional officers being recruited in the first phase in the West Midlands.

The MP said local people wanted those extra officers based in the local community.

“Residents want to keep policing local but closing police stations will clearly make it harder for officers to engage with the communities they serve,” she said.

“I urge Wednesfield residents to sign this petition and send out a strong message that we want to save Wednesfield Police Station.”

Mr Singh-Sohal has said he will freeze planned station closures if he is elected as the next PCC and has committed to increasing physical police presence in Sutton.

He said: “Communities across the region are desperate to keep their police stations and the local police presence they bring. They have been sharing with me their fears of what losing their local stations will mean.  Crime is ever-increasing and surrendering our stations would incentivise criminals and do more harm. That’s why I am committed to having a front desk at Wednesfield police station.

“I entered the PCC race to stop police station closures because I know just how vital they are to keeping people safe and deterring criminals.  I know I can do more with the police stations we have, and I will invest in them to benefit the communities they serve.

“The argument that these closures will save money simply does not wash for taxpayers who are paying more in policing precept annually.  Nor is it acceptable or fair for taxpayers in some areas to lose their police stations while new builds and refurbishments are funded elsewhere.”