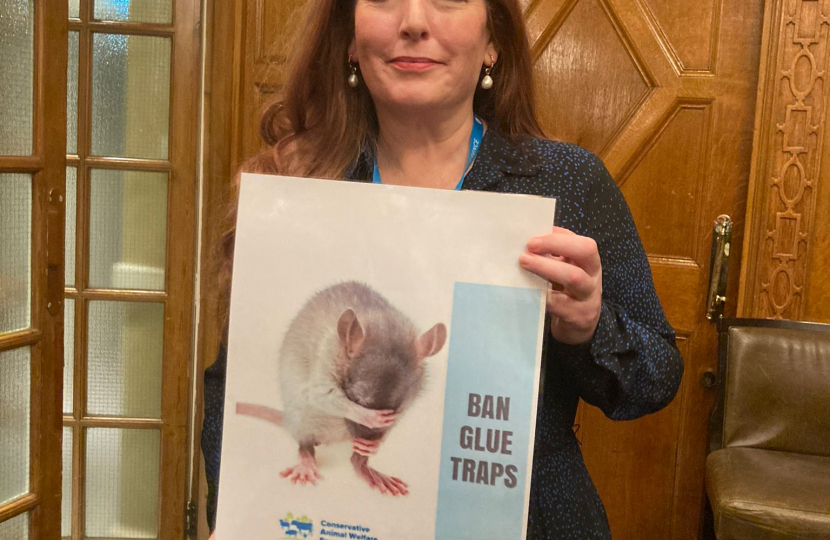 Jane Stevenson, MP for Wolverhampton North East, is celebrating after her bill to ban the use of glue traps by the general public became law yesterday (29th April).

The legislation passed all of its Parliamentary stages earlier this week, and was officially granted Royal Assent by Her Majesty The Queen on 29th April, meaning it is now on the statute book.

Jane’s Glue Traps (Offences) Bill has enjoyed the support of the Government as well as leading animal welfare charities and organisations including the RSPCA, HSI UK, Conservative Animal Welfare Foundation and others.

The successful campaign to ban glue traps as a means of pest control by the public is another significant step forward in the strengthening of animal welfare in England. The traps often lead to unintended other animals getting caught in them, and then dying slow and painful deaths in considerable distress.

The use of glue traps by professional pest controllers will require a licence issued by the Secretary of State for Environment, Food and Rural Affairs, and even then can only be used in specific circumstances, such as a threat to public health.

It is hoped that Wales and Scotland will follow suit with their own ban on glue traps.

Jane said: “I am absolutely thrilled that my Glue Traps Bill has been granted Royal Assent, meaning it has now become law. The banning of the  use of glue traps by the general public is another step forward in the strengthening of animal welfare legislation in England, and I want to thank everyone involved in making this happen.

“The use of glue traps is cruel and barbaric, and has often led to animals not intended to be caught in these traps dying in the most inhumane way. Together with ministers at Defra and agencies such as the RSPCA, HSI and others, I am pleased to have made a positive difference.”

Jane Stevenson, MP for Wolverhampton North East, has celebrated nearly 14,000 apprenticeships in the aerospace, defence, security and space sectors by hosting a reception in the Houses of Parliament.