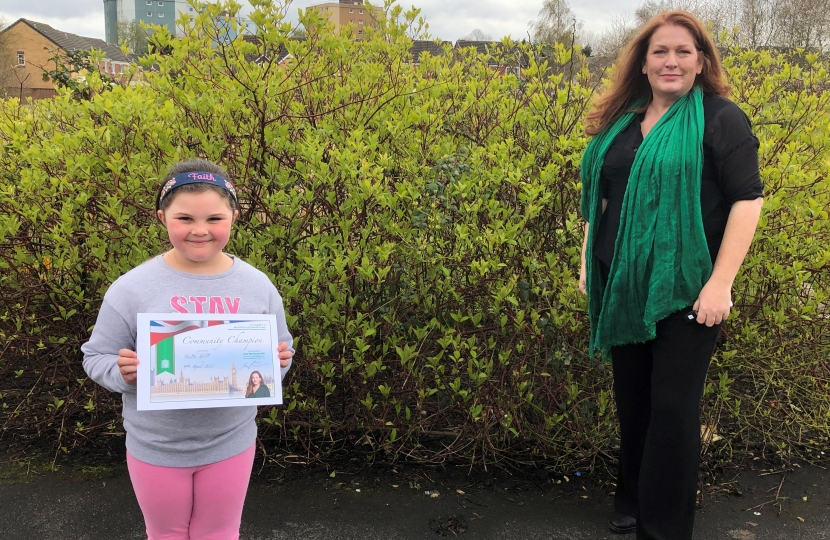 Faith Hill, who is 6 years old and from Wednesfield, had originally set a fundraising target of £500 to raise money for The Ambulance Service Charity and Crohn’s & Colitis UK. But she has smashed through that target to raise more than £2,000 by performing dance videos and doing walks around the local area.

Jane wanted to mark Faith’s amazing contribution to the charities and to Wolverhampton by awarding her a ‘community champion’ certificate to thank Faith for her fundraising efforts.

Jane said: “I am amazed at how much money Faith has raised for local charities who have struggled to raise much-needed funds during the pandemic. She has raised more than £2,000 for some incredibly worthy causes. Faith and her family can be incredibly proud of what she has achieved.

“I wanted to present a certificate to Faith, who is Wednesfield’s youngest fundraiser, to congratulate and thank her for what she has done. One of the positive things to have emerged from the pandemic is the strong sense of community spirit that exists across Wolverhampton. Lots of people have gone above and beyond for their community over the last year, and I pay tribute to all volunteers, fundraisers and key workers who have kept the country going through this difficult time.”

Faith’s mum Gemma said: “We are all so proud of what Faith has achieved, raising over £2,000 for various charities including the Ambulance Service Charity and Crohn’s and Colitis UK. She has loved making the dance videos and has had great fun doing the walks around the area to raise money.

“We were thrilled to have our local MP Jane Stevenson present Faith with a Community Champion certificate, to recognise her amazing fundraising efforts. She has also received an award from a food bank charity in Smethwick and certificates from some of the charities she raised money for.”